Nicholas M. Moccia, Esq., of counsel for the Law Offices of Robert E. Brown, P.C., appears for oral argument in the Eastern District of New York in Yanki Tshering v. Fairfield Financial, 08-CV-2777, wherein District Judge Sterling Johnson rendered a judgment voiding a $900,000 high cost loan.  Attorneys for Deutsche Bank attempt to convince Judge Johnson to vacate the judgment and allow them to intervene as the "real parties in interest".  Judge Johnson criticizes MERS and Deutsche Bank for a troubling "lack of transparency" with regard to the transfer of notes and mortgages, and expresses concerns that MERS may be a vehicle for banks to avoid taxes and filing fees in connection with the transfer and recordation of mortgages.  As of now, Judge Johnson is reserving his decision as to whether to allow Deutsche Bank and MERS to intervene and vacate the judgment.

Context, put simply:  This office represents a homeowner with $900K mortgage given by Fairfield Financial. We convinced the judge to cancel the mortgage so that she does not owe the money anymore. A different bank comes out of the woodwork, namely Deutsche Bank, and argues that the mortgage really belongs to Deutsche, and that Deutsche did not get a chance to defend in this law suit. Accordingly, Deutsche Bank is asking the judge to let them intervene in the law suit, cancel the judgment, because our client purportedly owes Deutsche Bank the money, not Fairfield. Our position is that Deutsche should not intervene at Deutsche should sue Fairfield, its predecessor-in-interest for failing to notify Deutsche about our law suit. Basically, the judge is critical of the bank attorney's position and seems to be saying that it is too late for Deutsche to intervene, and that Deutsche should be more transparent with regard to the loans it owns at any given time.
**If you are unable to access the entire transcript on the viewer below, you can access the entire transcript by downloading it from scribd.com.
District Judge Sterling Johnson of the Eastern District of New York wallops MERS and Deutsche Bank in Tsher... 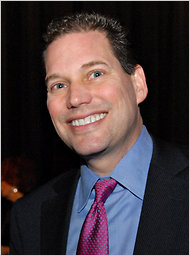 Gretchen Morgenson of the New York Times reports that the New York State Attorney General has subpoenaed Steven J. Baum, P.C. due to alleged questionable foreclosure practices.  Steven J. Baum, P.C., has handled an estimated 40 percent of all foreclosures in the State of New York.  Many of the the irregularities--including alleged instances of robo signing and document notarization issues--have already been highlighted in previous blog posts of mine.  You're welcome, Gretchen!  Link to NY Times Article:

“Surrogate signers” signed countless foreclosure documents - with someone else’ name

Below is a great article by Christine Stapleton about the very issue I touched upon in my previous blog post.  We're on to you, Elpiniki!


“Surrogate signers” signed countless foreclosure documents - with someone else’ name

At Lender Processing Services workers who signed tens of thousands of sworn foreclosure affidavits with someone else’ name were called “surrogate signers”, according to Cheryl Denise Thomas, a former LPS worker who admitted to notarizing as many as 1,000 sworn affidavits daily - often without witnessing the signature.
Thomas said despite “raised eyebrows”  her supervisors never used the word “forge” and repeatedly told workers the practice of signing someone else’ name on a sworn affidavit was legal. Thomas detailed the company’s foreclosure document processing practices during a deposition in an Orange county foreclosure case on March 23.
“They didn’t say forge the name. They just said this is legal,” Thomas said. “This person is going to be this person’s surrogate signer because this person has a lot to do.”
LPS, a Jacksonville company, charges a fee to locate and assemble the documents necessary to file a foreclosure. The Florida Attorney General has received complaints about the firm and its documents preparation practices. According to the AG’s web site, LPS and a defunct subsidiary, Docx, produced documents “that to even the untrained eye, appear to be forged and/or fabricated as the signatures of the same individual vary wildly from document to document. These documents are then used to gain standing for the plaintiff in a foreclosure suit.”
When Thomas questioned her supervisors about not witnessing signatures before she notarized documents she said was told, “We’re legal. You can do it. That’s fine. Just notarize it.” Thomas said she has been questioned by FBI investigators about the document processing practices at LPS. She also said her daughter, Tywanna Thomas - whose name appears on thousands of sworn affidavits - also worked at LPS along with Thomas’ nephew.
Thomas said her supervisor was Renee Gaglione, whose name popped up in a Palm Beach county foreclosure case on Tuesday. Gaglione is also believed to have been the supervisor of Linda Green. Variations of Green’s signature appear on thousands of foreclosure documents, including the foreclosure of Lynn Szymoniak, a Palm Beach Gardens lawyer who specializes in white collar crime.
Szymoniak discovered the practice of robo-signing: employees at banks and mortgage servicing companies who sign sworn affidavits without any knowledge of the case. Linda Green is believed to be among the most prolific robo-signatures.
On Tuesday Szymoniak came to court and again, seeking permission to depose Gaglione because, as Syzmoniak’s attorney, Mark Cullen said, “we don’t even know if Linda Green is real.” Gaglione’s attorney, who asked for a protective order barring Szymoniak from deposing Gaglione, called Szymoniak’s attempt to depose Gaglione “just plain harassing.”
at 12:40 PM No comments: