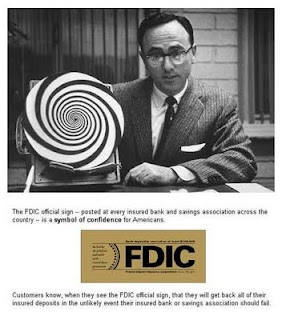 An interesting new development, increasingly common in the foreclosure defense practice area, is the attempted judicial intervention of new Main Street villain, the FDIC Receiver. The FDIC appears to be increasingly active in local foreclosure actions with the result that many defendants may lose their ability to raise the usual counterclaims which attempt to remedy the ubiquitous abuses perpetuated by consumer lenders. In addition to losing a legal remedy, FDIC intervention effectively removes any leverage a foreclosure defendant may have to settle with the foreclosing lender by way of a loan modification.

The nightmare scenario runs as follows:

• Borrower Joe (our consumer borrower)
• Originating Bank (soon to be failed Originating Bank);
• Solvent Bank (i.e. who was “too big to fail” and rescued by cronies
in D.C.);
• FDIC (our new villain)

2. Originating Bank fails and is taken over by the FDIC Receiver.


3. FDIC Receiver attempts to salvage failed Originating Bank by selling off its “good assets” to Solvent Bank through “Purchase and Assumption Agreement.” Among these “good assets” are Borrower Joe’s loan obligations.
4. Liabilities remain with failed Originating Bank including claims made by the failed banks’ creditors. FDIC Receiver has the power to settle these creditor claims administratively with broad discretion to accept or deny claims outright.
5. Borrower Joe defaults on his loan and Solvent Bank commences a foreclosure action.
6. Borrower Joe hires Main Street Attorney who raises a host of counterclaims against Solvent Bank.
7. FDIC Receiver gallops to the rescue of Solvent Bank and tells Borrower Joe that its counterclaims are “liabilities” of failed Originating Bank and Solvent Bank is not responsible for these liabilities pursuant to the Purchase and Assumption Agreement.
8. FDIC Receiver then moves to intervene in the foreclosure action. Judge grant FDIC’s request to intervene, and then FDIC removes Borrower Joe’s counterclaims from local court to its discretionary administrative resolution panel in Washington D.C. or North Dakota.
9. As a result, Borrower Joe loses all leverage to settle with foreclosing Solvent Bank and also discovers that the FDIC Receiver denies his claim or gives him pennies on the dollar as a remedy because Borrow er Joe is too small to rescue.
The good news is that this nightmare scenario probably can be avoided with well crafted opposition papers.  Under the NY CPLR and supporting case law, there is a very strong argument against allowing the FDIC to intervene in such a nightmare scenario. The policy reasons for not allowing such an intervention are self-evident.
If you are interested in discussing some of the arguments this office has made against the FDIC-Receiver feel free to comment below or visit our website:   www.robertbrownlaw.com/